My remote photoshoot during the Corona pandemic

My remote photoshoot during the Corona pandemic

So, if you’re reading this a few years from now, hopefully, Corona, COVID-19, and the global lockdowns will be just a footnote in the history books.  Unfortunately, we are living it right now. 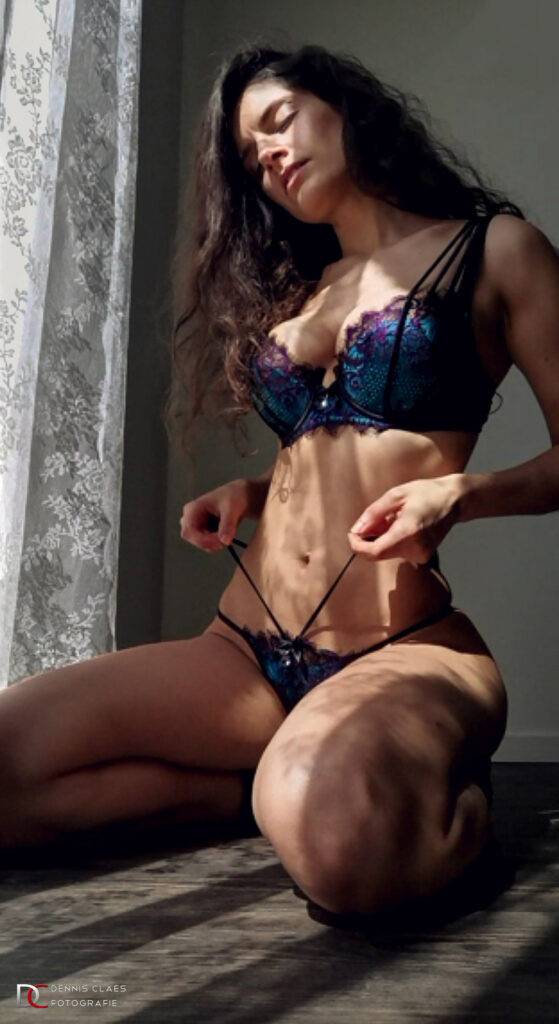 About a week after the lockdown, I saw a few “remote shoots” appear.  I thought it was funny.  Are people actually taking photographs of their screens?  How is that “photography”?  You really can’t wait until the lockdown is over?

Then I got contacted by Luna Lopez.  Luna and I have been working together for over a year now.  I absolutely love working with her.  She told me she had done a remote shooting.  She showed me some results and those were actually not that bad …
She asked me if I wanted to do a remote shoot with her.  Well …. enter … the hypocrite.  haha  What?  Am I going to say no to this awesome model?
I was really nervous.  I really don’t like video chat, let alone having to direct a photoshoot through one.  The one thing that calmed me down was the fact that Luna is a really nice and calm person, so I knew that nothing was “expected” of me, it was just supposed to be a fun experience.

As far as I can tell, there are two ways of doing a “remote shoot”.  I have seen people actually taking high-resolution images of their PC screen.  I don’t like that very much, because it has reduced contrast and you can mostly see the “screen door” effect of the screen.
The other way, the way we did it, is to have a video chat and take screenshots.  The downside is that the resulting images are really low resolution.  However, I like those better, because they have more lively contrast and you don’t “see” the screen in them. 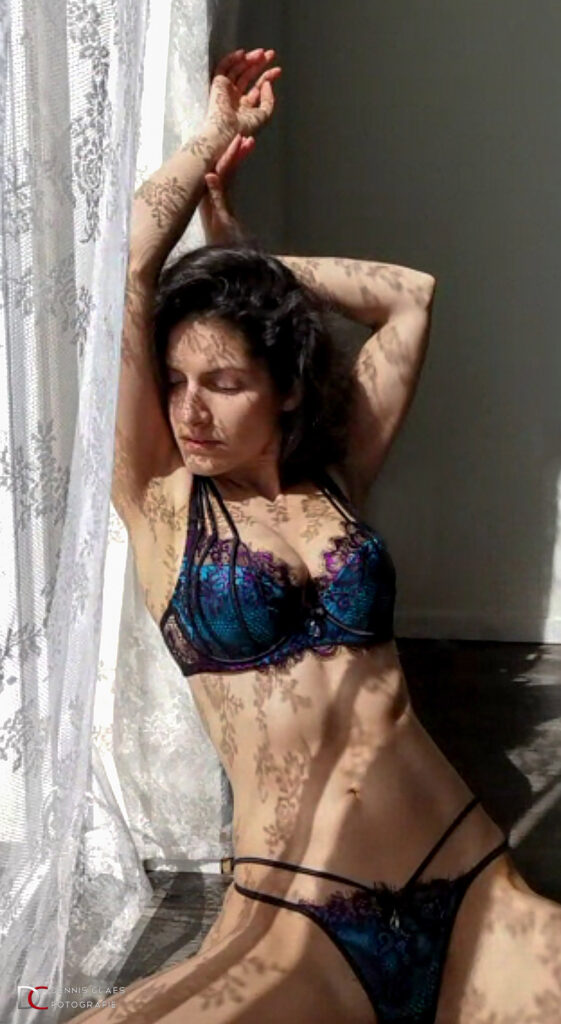 So we started the video chat and straight away, we ran into the first problem … my face was picture in picture on the screen and I did not know how to hide that.  So we had to work with that, making sure that screen was always in a part of the image that I could crop, or easily retouch away in photoshop.
Luna showed me around the place and I loved the big window and the curtains.  There was a lot of sun that day, hard light, so really good to work with.  If I wanted it softer, I just need to keep her close to the window, but at the very edge of the light source, so no direct light would fall on her.
Next problem: when a model poses, she hears the click of a camera, so she knows when to change pose.  I was taking screenshots of my phone, so there’s no click.  The solution?  I yelled “click” every time I took a screenshot.  I so regret not having a video camera taping the whole thing.  It must’ve looked utterly ridiculous.  “Click”  “Click”  “Click”, I felt like an idiot.  haha
Next problem: the background was regularly overlit.  Even her body had a lot of burned-out highlights.  It took a while for me to figure out how to control that.  I found out that the camera on her phone is exposing for the face.  This means that if her face is in a dark part, the rest of the image will be overexposed.  So during the shoot, I had to manage Luna so that her face was in the lightest parts of the light source.  And it worked!  The camera started adjusting the exposure exactly as I wanted it to.

I also wanted some interesting perspectives.  Luna didn’t have a tripod for her smartphone, so we used her cat’s scratching post.  haha  I especially like the images we took from the ground up.  It was so funny to actually see her cat sometimes in the scratching post.

The shoot lasted about an hour. I think I took about 200 images.  Luna is a posing machine!
When I started working on the images, I was a bit disappointed about the sharpness.  I did have really really … REALLY low expectations about the quality of the images.  But during the shoot, judging from the screen on my phone, it actually didn’t look all that bad.  It was when I blew it up on my desktop, that I really saw how out of focus the images where.  But still, I was overall pretty content with the result.
In post-processing, I applied some sharpening.  However, even with a small amount of sharpening, the image quickly became pixelated, so I had to balance that a bit.
For the rest, I just removed some cables, power socket, adjusted the composition a bit, and did some minimal color grading.

The response was overwhelmingly positive.  I’m a realist, I understand that a lot of the positive attention was because of the beautiful model in the pictures.  But still, I did also receive praise for the lighting and the overall quality of the image, given the circumstances. 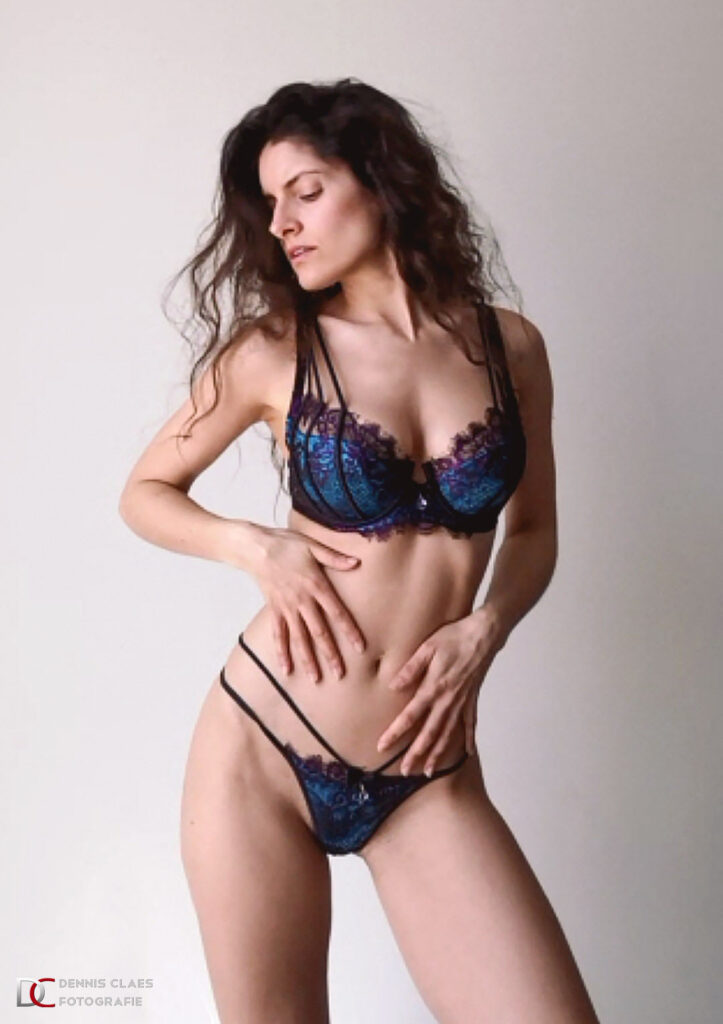 Would I do it again?  No.
I actually got an offer from another model who wanted to do a similar shoot.  I said I would only do it if I can improve on the quality.  I searched for days for a way for me to control the camera on her phone.  But I didn’t find a solution for that.  So I didn’t see the point in doing it again.
The goal was to just “try something new”.  I wanted to see if I could do it.  It was a challenge.  It was never supposed to be a “new way of shooting”.
Just have to wait for a few more weeks … and I can dust off my Nikon Z7.  Yaaaay!  Looking forward to it!